With the expanded awareness of environmental crisis our planet is currently facing, comes the increased interest in alternative energy and its possibilities. For many decades already households and different companies have been introduced with solar energy and its advantages. It means that now there are many options how even an average family can produce its own energy by collecting solar power.

While it might seem that going solar is surely a trend that has experienced nothing but constant growth in terms of popularity and sales, such positive tendency of course causes slight counter-effect as well. The good word of solar energy has also been encircled by many myths that actually are not even near to being true. While there always undoubtedly is a potential for improvements, many myths related with solar panels are simply very out-dated and for everyone, who has at least little interest in purchasing his/her own solar panel system, it is quite important to know what is what in the real life.

Listed below are 5 most common solar-panel myths debunked.

Myth #1. Solar panels are expensive and only very rich people can afford them.

This is one of the main arguments people are still using against purchase of solar panels.

While a couple of decades ago solar panels, indeed, where very costly and only people with high income could afford installing their own solar panels, now the situation has improved in favor of middle-class consumers. Residential solar systems are typically sized from 3 to 8kW and they cost in the range $15,000 and $40,000 which is a lot cheaper price compared to what it was when the commercialization of solar panels was only at the beginning phase.

Many governments are also stimulating usage of alternative energy by implementing various methods. In the U.K., the government is supporting Feed-in Tariff scheme which actually allows to earn money from collected energy, but in the USA they have introduced a 30% Federal solar tax credit which means that house owners, who are producing their own solar energy, can claim up to 30% of the price that has been paid to install solar panels. Such solar-related policies strive to make solar energy more accessible and, in fact, it has been going extremely well in some countries. For instance, in 2013, ScientificAmerica published a study which estimated that middle-class owners are the ones buying out all the solar panels in the USA and it found out that, in fact, “installations are overwhelmingly made in neighborhoods where median incomes range from $40,000 to $90,000”. 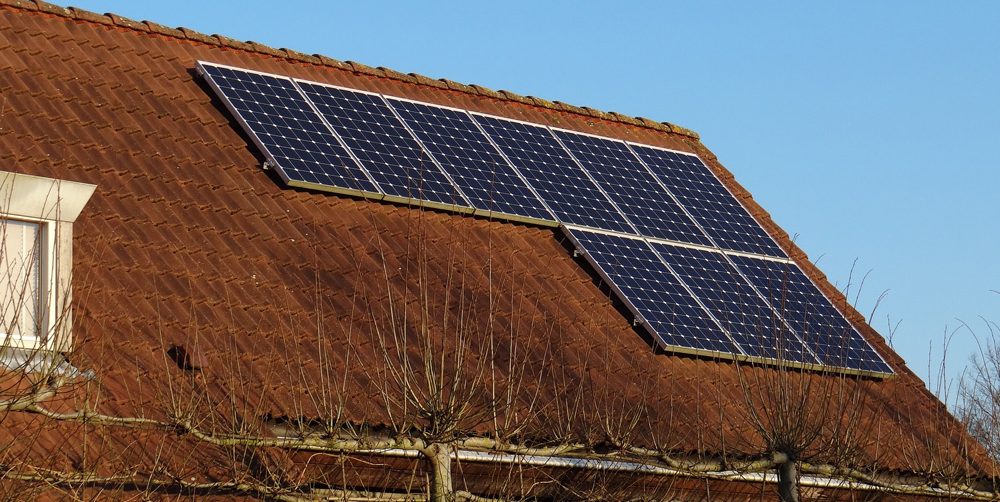 Solar panel on a building

It is actually hard to tell where does this myth come from, but it is true that many potential buyers are worried about all the effort, money and time they will have to invest to maintain their solar panels in a good shape. Maybe it comes along with a false perception that solar panels are these super-fragile technologies that need to be constantly “babysitted” so that they are not damaged by external factors such as wind and rain. The reality is not that harsh and solar panels are actually very easy to maintain. As they have no moving parts, it requires you to only take a water hose couple of times per year and wash off all the debris that has been collected on the panels. If you live in an area where it rains once in a while, you will have to think about these issues even less since the nature will do the job for you.

Myth #3. Solar panels are nothing but ugly and they will ruin whole aesthetics of my house.

This myth, as basically majority of the myths, has its roots in the history of solar panels.

Indeed, in the ‘70s, solar panels did not have very pleasing appearance and people had to deal with the technology the way it was. Modern solar panels, however, look slightly different and they are designed to contour more closely to the roof. There are also some alternative options e.g. non-reflecting solar panel roofing shingles and thin-film solar panels which look quite chic. Nevertheless, having solar panels on your rooftop says a lot about the personality of the house owner and will certainly leave as great impression as thoroughly decorated exterior.

Myth #4. Solar panels do not last long enough to pay off.

Solar panels are not cheap (but they are not expensive either as we learned from the myth #1), so there are quite a few people out there who claim that the lifespan of solar panel is too short for it to pay off eventually.

Again, there is no real point in worrying about this aspect. Majority of solar panels are sold with a 10–25 year warranty. Now, compare this to the statistics from South Carolina, where average solar panel installation system pays itself off after 6 years of usage. Despite the warranty, solar panels can last for very long. The oldest solar panel in history was known to successfully produce solar power after 60 years of usage.

Myth #5. Solar energy technologies can still be improved so it is not worth investing in them now.

Another myth that many people like to use as an argument is a conception that solar panel technologies simply have not reached their optimum functionality yet.

Of course, solar technologies will surely experience different changes and improvements in the future, but as for now, solar panels have been around long enough to justify their place in the market and on our rooftops and house-yards. Nowadays, solar energy is used across many industries and even NASA is relying on it a lot. Solar panel efficiency has increased significantly as well: today solar panels are rated at 300-315 watts that take up the same roof space as the solar panels that were used some years ago and that were rated at 215-235 watts.

So, the prices have dropped, the efficiency has increased, more and more industries are gaining great benefits from producing their own energy but people still doubt if solar panels have been developed well-enough?

Well, luckily, not every myth is ought to be trusted and real facts can explain more than all the wide-spread myths combined.