Solar panels can be found just about everywhere. You can find them on the roof of buildings, cars, devices, and on specially built farms. The rise of the renewable energy industry ensures the applications of solar panels are growing exponentially. Some solar energy enthusiasts assert that gigantic solar panels over a wide area would absorb enough sunlight to power entire cities and effectively end our energy challenges.

In line with this wave of thinking, road networks have become a prime target for deploying massive solar panels over a wide area. Solar paved roads producing useful energy for everyday consumption is an exciting idea in renewable energy and several innovators around the world have taken initiatives to make this a reality. Like every nascent technology, basic concerns still remain such as can this technology deliver as promised? Is it practical to put so many solar panels where millions of vehicles pass? Is this a cost-effective use of resources? Could it possibly collect enough energy to be worthwhile? In assessing the overall efficiency of the solar roadway technology today, this paper will highlight some pros and cons that will point us in the right direction.

The most interesting integration of solar panels to our roads are the technologies that enable us to build the roads themselves directly from solar panels. Several companies around the world have demonstrated encouraging capacity in this regard.

Solar Roadways: This U.S. Company has created workable interlocking building blocks of solar panels that vehicles can actually drive on. They are modular systems of specially engineered solar panels that can be walked and driven upon. While driving on them, these panels collect solar power that supplies electricity to homes and businesses.

WattWay: this French company has also created its own patented solar panels for paving roads. This was produced after 5 years of research jointly led by Colas and the French National Institute for Solar Energy. 20 m² of Wattway panels provide enough electricity to power a single home.

PAVenergy: this Chinese company, who is also a pioneer in solar road development, in late 2017 teamed up with Qilu Transportation to open the country’s first solar highway. Engineers expect the road to generate 1 million kilowatt-hours of electricity a year through its 10,000 solar panels. The construction of this special highway cost approximately $2.7 million US dollars.

These innovative technologies for building solar driveways are lauded as a way to generate solar power without paying for additional land. They can have LED lights that act as road and warning signs built into the road itself. They can also use gathered heat to melt snow and ice on the roads. It has also been asserted that having a source of electricity beneath cars at all times would make it easy for the mass deployment of electric vehicles. It will enable them to overcome a major snag that EVs face, which is finding charging points when they run out of batteries.

It should be noted that with the improvement in production technologies, these solar roads are more feasible today than ever before. Thanks in large to an increase in Chinese solar production. 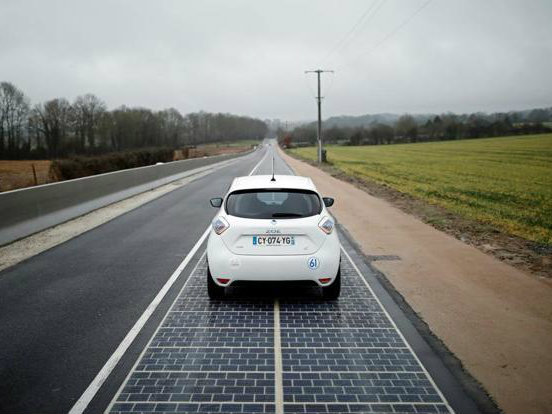 However, it would be worthwhile to also have an idea of just how practical and economically feasible this technology is. So let us ask some critical questions on the current state of this technology.

Cost: Solar paved driveways are considered extremely expensive. Let’s take the 2017 Shangdon project in China as an example. The estimated cost of building that road is about $458 per square meter. This is expensive compared to the $5 per square meter it would cost to build with asphalt. This puts the total value for the Shangdon project at about $2.7 million (this is to generate enough electricity to power roughly 93 American homes annually). Meanwhile, on the average, 93 American homes powered by the national grid will consume about $125,000 worth of electricity. This simply means the project is not cost-effective.

The Efficiency of Display: Your typical roof-top solar panels are installed at an angle to improve the efficiency of its exposure. The slanting orientation helps optimize how much sunlight hits these panels. On the other hand, the panels used for the solar roadways obviously lie flat and do not tilt towards the sun’s rays. This means they produce only about half as much solar power as rooftop installations. Furthermore, the light reaching the panel surface can be affected by nearby trees, buildings, or dirt that covers up the pavement. The cars themselves can even become a major obstacle to exposure to light, especially during traffic jams.

Safety: Finally, there is the issue of driving safety when it comes to the use of these solar driveways. Solar roads could mean driving on transparent surfaces, with smooth glass, or something that mixes rock and glassy materials. The transparency required for light to meet the photovoltaic cells reduces the amount of gravel and rock that may give the road enough friction to help with smooth and safe driving. It can be said, that the more glassy materials added to the road, the more the risk of cars skidding off thanks to poor traction.

The eventual iteration of this technology that will gain wide acceptance may still be some years away. Smart highways or smart roads is a more inclusive terminology for a number of different suggestions to incorporate technologies into roads for generating solar energy, for lighting, for monitoring road conditions, improving the operation of autonomous cars, etc.

There is no doubt that the idea of having solar panel roads appeal to our collective sensitivity for improved clean energy sources. This kind of thinking will get us on the road to wean ourselves off the addiction to fossil fuel. In some years to come, our roads may become one the most efficient sources of energy across major cities and highways around the world.