Can solar panels generate too much electricity?

As our energy and environmental crises develop and deepen, solar panels are being hailed as one of our potential saviors. Unlike fossil fuel based technologies that pollute our atmosphere with harmful carbon dioxide and other emissions, solar panels convert sunlight directly into electricity; it is a completely clean, environmentally friendly process. The major question mark behind these devices though is whether they will be capable of generating sufficient electricity to satisfy our – substantial – energy needs. Due to their reliance on access to direct sunlight over an extended period, and the fact that this is still a young, burgeoning technology, solar panels in their current incarnation are not capable of meeting the energy needs of an industrial society all on their own. The hope for solar panels and their champions is that, in the years ahead, the power and efficiency of these devices will develop to the point where they can. As we can see, up until now, the focus has been on whether solar panels can generate enough electricity. One question that has as yet remained largely unexplored though is: can solar panels generate too much electricity, and what do we do in that case? Read on, as in this blog post we attempt to answer that very question.

Solar panels and how they work 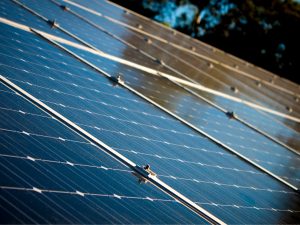 In the most basic of terms, solar panels work by using sunlight to generate an electric current. Two layers of semiconductor material (usually silicon) is combined with other materials to create a solar ‘cell’ surrounded by an electric field, ie. The solar cell has a positive pole and a negative pole, meaning current can flow within it. When sunlight hits the cell, packets of solar energy known as ‘photons’ knock loose negatively charged electrons from the surface of the semiconductor material, causing them to migrate to the positive pole of the cell. Thus an electric current is generated. A standard solar panel actually consists of many individual cells connected in series, so that current can flow between them, and also contains a series of conducting metal plates connected to the cells, which ‘collect’ the gathered electrons and transfer them to conventional electrical wires that run into your house. At that point, the electricity generated by the solar panel is made usable by our homes and businesses.

As you can see, solar panels rely on sunlight if they are to function at all, and here is the crux: the supply of sunlight is variable! It changes from hour to hour, day to day, season to season – and from latitude to latitude, during all these time periods. In cloudy, overcast weather conditions and climates – and during the evening hours, when the sun goes to sleep for the day – the effectiveness of solar panels at generating electricity is greatly reduced. Everyone can understand what occurs in that case! Either you learn to do without your electric appliances – or you purchase extra electricity from the utility grid. But when the sun shines to excess, and your solar panels generate too much electricity, what happens then?

Too much solar electricity?

Actually, your photovoltaic (PV) solar panel is connected to the utility grid, but when it generates electricity it first stops off is your home’s lights, electronics, and appliances, which it supplies with whatever amount of power they require at that time (if any surplus is needed, it will be supplied by the grid). 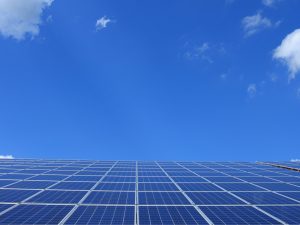 On the other hand, if your system produces power in excess of your requirements – which would be the case if there is excessive sunlight in your area on that day, or if your power requirements at that time are very minimal – then that excess power will get fed back into the grid. When this happens, your electricity meter actually runs in reverse, and for ‘selling’ your surplus electricity back to the grid, you will earn a credit on your next electricity bill. The amount you get for the electricity you feed back into the grid will be the retail price for the power you buy from the grid, usually about 60 percent of the supply rate. ‘Net metering’ is the official term for this billing mechanism.

In some states, there are limits on the amount of electricity you can feed back into the grid from your home solar system. For example, in the state of Maryland, the law enables you to generate up to 200 percent of your home solar usage. If the amount you feed back into the grid surpasses this percentage, you will no longer be reimbursed, however, you will still receive Solar Renewable Energy Certificates (SRECs) that you can trade as commodities on the Maryland state SREC market, earning further revenue. These tickets are sold at the market price, which is determined by supply and demand.

Why am I generating too much solar electricity?

There are a few reasons why you could be producing more power from your home solar system than you actually need. Depending on the time of day, the season, or the climate in which you live, your system may be receiving such a substantial amount of sunlight during the daylight hours, that it produces larger quantities of electricity than your household requires. This is commonplace during the warmer months: in the summertime, your system will be feeding excess electricity back into the grid (whereas in winter, your home will be drawing extra power from the grid). On the other hand, the reason why your system may be generating too much electricity for your needs may have nothing to do with the environmental conditions in your area – and everything to do with your consumption habits. Maybe your energy consumption is very low at the present time due to an unoccupied household, or you are just not in the habit of using very much electricity at home.

As always, when determining why your system is generating too much – or too little – electricity, you have to look at both supply and demand. And at the end of the day, the expression ‘too much electricity’ is really a misnomer. After all, by feeding any excess power you produce back into the electricity grid, you earn a nice little discount on your monthly electricity bills. ‘Too much electricity’ translates into energy bills savings, and spare cash for those home renovations or extra vacations you’ve been planning!