There’s not a person in the world that hasn’t been unpleasantly surprised by the electricity bill at one point in their life. In those situations, we naturally start to think about alternatives. Using the Sun’s energy for power isn’t a new notion, although there is a difference between converting its energy to produce electricity, which is a newer and more complicated process, and using it to produce hot water. The latter has been used throughout human history, but in the last 4 decades, it’s become a norm in some parts of the world. Israel, for example, is one of the first countries to commission a nation-wide installation of solar water heating back in 1980. It’s no wonder people have been turning to solar water heating, since it can make up for 10-90% of your hot water needs throughout the year, cutting your bills significantly!

At first glance, the idea of getting a solar-powered water heater might seem intimidating, especially because a lot of people think it’s more complicated than it actually is. In essence, it all boils (pun intended) down to ‘catching’ sunlight and converting it to heat used to heat up the water we use. So let’s take a closer look at what that really entails. 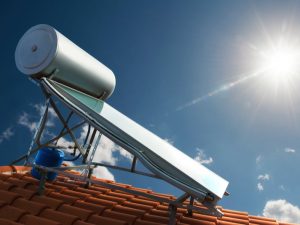 First thing’s first: every solar water heater (SWH) falls into one of two categories: it can either be an active or a passive solar water heater. What this means is that there is a difference in the way water (or another liquid – we’ll get to that later) circulates through the system. Active systems use a circulation pump, whereas a passive SWH relies purely on the rules of physics, meaning that the water naturally rises when it’s warm, thus creating a circulating cycle. Active solar water heater. systems are usually more expensive but are necessary if you’re living in a climate where the temperatures fall below freezing, whereas passive SHW systems are cheaper and more durable.

An active SWH can have direct or indirect circulation. The ones with direct circulation use a pump to circulate water to the roof of your house, where the heat collector is, and bring it back to the hot water tank, where it’s ready to be used. Similarly to passive SWH, this one also warms up the water which you will later use through the faucet. The only difference between the two is that the active one can heat up the water faster and has a pump with controls. However, if you’re living in a climate that has harsh winters, having both passive and active SWH with direct circulation will not do – when the water freezes, you will not only lack circulating water, but the frozen liquid could damage your pipes.

The problem mentioned above is the main reason why most people decide to get an active solar hot water heater with indirect circulation. These systems are often referred to as the ‘closed-loop’ systems, and we’ll explain why right away. In order to solve the freezing problem, these water heaters actually use a non-freezing liquid that is being heated up in the collector. “Well, doesn’t that defeat the purpose of a solar water heater”, you ask? No, not at all, because even though the liquid that’s being heated up isn’t water, the pipes lead the liquid from the heat collector to the water tank, filled up with water you’ll use. But the non-freezing liquid never comes into contact with water – it just passes through a smaller, copper tank (called the heat exchanger), that’s inside the water tank, heating up the water surrounding it, and continues up to the collector again, making a closed loop of circulating, water-heating liquid.

We’ve already mentioned some of the parts that these SWH systems have, but we’ll lay out everything you need to know about each one here.

As you might’ve guessed, the collector’s role in the whole process it to heat up water. It is black in color, because that way it attracts the most light, and is positioned on the roof of the house. Preferably, your roof should have direct sunlight for a longer period of the day, without being surrounded by trees or taller buildings. It usually comes in two main types.

The flat plate collector is exactly that – a flat, black plate that’s coating the thin metal boxes through which the pipes are going through. It’s simple and moderately effective.

Evacuated tubes are somewhat more complicated than flat plate collectors. As their name suggests, they are empty inside and look a lot like fluorescent lights, but they’re also painted black in order to catch the sun rays. They trap the sunlight and ‘lead’ it to a collecting device located at the top of the tubes. The liquid flows through this heating device, warms up, and then goes down to the hot water tank. Due to their complexity, installing evacuated tubes might require a slightly bigger investment, but they are more effective at preserving heat than flat plate collectors. 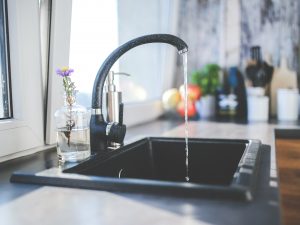 When the fluids in the pipes heat up in the collector, they make their way to the hot water tank. That’s the place where the water that needs to be heated up is. Depending on the size of your family and their habits – a regular-sized tank can hold anywhere from 30-60 gallons of water. If you don’t already have a hot water tank, one will have to be fitted into your home. Also, during the winter months when sunshine can be scarce, it’s highly recommendable that you get an electric temperature booster in your water tank. This will provide you with hot water year-round, no matter the weather.

As previously mentioned, all active SWH have a pump that is used for water circulation. However, if you aim to lower your bills and go green(er), this might hinder that goal by a certain percent, because most pumps use electric power to work. A great alternative to the electric pump is the solar-electric pump (also known as the photovoltaic pump), that also runs on solar power, making the whole SWH system running on endless and renewable energy!

You might not want to use your solar panels to heat up water during the winter – that’s why most SWH systems have a control box with a valve that can switch them on and off. Some systems come with a pressure gauge, a thermometer, and a thermostat.

Choosing The Right One

Selecting a solar hot water heater suitable for your home can be a daunting task. While it might be best if you consulted professionals with years of experience in the field, it’s important to educate yourself so that you know to ask them all the right questions.

Consider the climate you’re living in, as well as the number of people living inside your home in order to decide on the perfect type and size system for your needs. Take some time to investigate whether there are any local regulations mandating a specific SWH system in your area and make a ballpark estimate of the energy efficiency and cost of this venture.

The important thing to know is that a good quality SWH should be able to satisfy 30-50% of your household’s needs and pay itself off within 5-15 years. Even though it might seem like an unnecessary investment right now, think of this as a long-term saving strategy. The price of electric energy can vary – the Sun is constant, after all.