How Does a Solar Pump Work?

Sadly, the lack of fresh water was listed by the World Economic Forum as the largest global risk in terms of potential impact over the next decade. Almost half a billion people in the world face water scarcity all year round.

At the same time, it seems as though we’re just beginning to tap into the possibilities that solar energy can offer us. As a fast-growing engineering field that’s becoming more and more incorporated into the fabric of our everyday life, there’s good reason to hope that most of the world will have access to drinking water in the next ten year precisely because of solar water pumps.

What Is a Solar Water Pump?

In short, a solar pump is a device made to pump water, all by using the energy from the Sun. That is to say, it runs 100% on renewable energy. Depending on the climate and the part of the world you’re living in, water can sometimes be scarce. For example, solar water pumps are an ideal solution for rural households that don’t have access to electricity or often experience a period of drought during the summer.

The other most common uses of solar water pumps include pool and fountain pumps, irrigation pumps, providing water for livestock, extracting water from dams and community water supply. 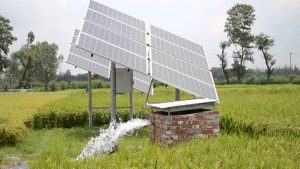 Even though they may sound like an outlandish solution, solar water pumps actually come with a long list of advantages compared to regular electrical water pumps. First off, as the name itself suggests, it doesn’t require any outside electricity to operate; rather, it’s capable of producing electricity on its own. That means it is by no means dependent on the infrastructure or level of development of a certain remote area – where there’s sun, there’s the possibility of placing a solar water pump.

Their simplicity makes them very easy to operate, and extremely easy to maintain. This low maintenance level directly contributes to a solar-powered water pump being a smart (not to mention green) and profitable investment.

Solar water pumps run on electricity that is generated by converting the Sun’s energy collected in solar (photovoltaic) modules or panels.

The solar modules provide the water pump system with the energy. It collects the warmth from the sunlight that will later be converted into AC power. The best position to place the solar modules is the one where they will be exposed to direct sunlight the longest in one day. Since solar water pumps are often placed in rural areas, it’s a good idea to place these modules above the ground with the use of a mounting pole and fence them off, so to avoid any damage that an animal could cause it. Often times, solar modules lead the collected energy to be kept in the battery (technically, this is the fifth part, but is very closely related to the modules themselves) for days when there isn’t much sunlight.

The water pump itself is a simple mechanism attached to a motor that runs on generated AC power. The pump can be placed on the surface or below the ground, meaning there are two main types: surface pumps and submersible pumps. Depending on your needs and natural circumstances, one would be a better choice than the other. If you need to pump water from a shallow well or a pond, or you have a farm and need to move the water from the cistern to your reservoir, a surface water pump will do the job just fine.

In case of the dire need for clean drinking water, the right choice to place would be a submersible water pump. This is due to the fact that clean water can often be found deep below the surface. In fact, any water body that exceeds 10 meters of depth requires this type of water pump. 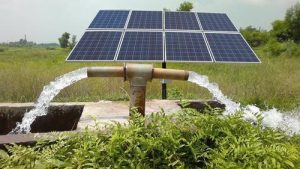 As with any solar-operated device, there has to be a way to control when the water is pumped, as well as pressure and operating times. If the water reservoir is already full, not only would it be completely useless to pump more water into it, but it would also use up the energy the solar water pump system generated, that would certainly be useful for later use. The pump controller also provides voltage protection and comes with an integrated inverter, that converts direct current (DC) that is collected into alternate current (AC) that is most commonly used to run the pump motor.

Really a self-explanatory component, a water reservoir serves as a “battery” of sorts and preserves the water that’s pumped into it. From there, the water is taken to taps and water pumps strategically placed for each individual purpose, depending on the reason you’re installing a water pump in the first place. The water tank is the simplest component of a solar water pump system, but necessary nonetheless.

A solar water pump can draw up to 8.000 gallons of water every single day, making them one of the most practical investments around. With their minimal maintenance costs, ease of installation and virtually no ecological impact, solar water pumps prove to be a godsend to people who choose to live a more secluded life, as well as for those living in countries with underdeveloped electricity and water supply infrastructure. All in all, we have a lot of reason to hope that these systems will help eradicate the lack of fresh water as a growing global risk.