How Visible Light Works and Why do we See it?

Most of us take our vision and eyesight for granted. Unless you have some serious eye defect e.g. color-blindness that disrupts your vision, you probably have not thought much of why the colors we see appear to us the way they appear and how come we are not able to see other wavelengths of light. We just know it when we see red or when we see blue and this knowledge (or to say it better – ability) to see and distinguish all the colors of spectrum just feels natural to us.

However, our eyesight and the colors we are able to see are quite unique to us. Animals, in fact, have different vision and when we talk about “visible light” we talk about light which is visible to human eye only. Dogs and birds for instance see completely different wavelengths which means the colors they see are far from the same than the ones we do, but that does not mean their vision is “wrong” or “faulty”. It just means that they have different eye mechanisms that are capable to see particular wavelengths.

If you have been curious about what exactly visible light is and how come we can see particular colors, then keep on reading this article as it will guide you through some basic knowledge on visible light, its spectrum and above all will strive to clear up the big question – why do we see visible light?

What is visible light spectrum?

Visible light, also referred to as the visible spectrum, is the part of the electromagnetic spectrum that can be detected by the human eye. To understand how our eyes detect different colors and why our vision is limited to that particular spectrum part, we should give that forgotten knowledge of physics you have probably been taught either in primary school or high school a bit of polishing and reminding. 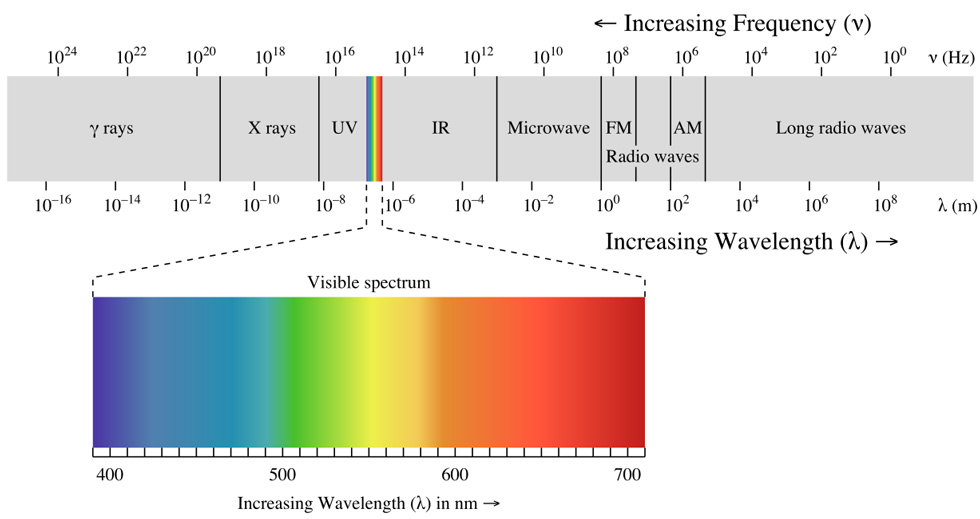 The light behaves like a wave and hence by describing light and different colors, we have to talk about wavelength and frequency. Wavelength is the distance between two peaks of the wave and our eye mechanism is made to see only particular range of wavelengths. When we talk about “light” or “visible light”, we talk about a particular portion of electromagnetic range which is located between 390 to 750 nm (0.39 to 0.75 µm). Our eyes are capable to detect only this portion. Undoubtedly there are other colors and frequencies out there such as infrared and ultraviolet light but our “receivers” simply are not made to detect these wavelengths.

As for detecting particular colors, we have to talk about different wavelengths of each color in the visible light spectrum, since each color of the light depends on the frequency. The visible spectrum is always the same as for a rainbow; the order of colors in the visible light spectrum is red, orange, yellow, green, blue, indigo, and violet. When we see an object in a particular color, we do not see it for instance red because it IS red, but we see it red because the object absorbs rest of the colors and reflects off the wavelengths of the color red. Black and white, though, are exceptions since white color is combination of all the colors while black color means that all the colors of visible light spectrum have been absorbed.

When discussing the actual reasons behind our ability to see visible light we can talk about two major things:

The former one can be explained quite easily since medicine and anatomy now know a lot about how exactly our body and different parts of it works. The mechanisms of our eyes and vision are explaining how come we see only the particular portion of electromagnetic spectrum and not more. The anatomical explanation lies in the conical cells in our eyes. Different wavelengths differently stimulate the receptors in our eyes, for example yellowish-green light will stimulate L and M cones strongly, whereas red light stimulates mainly L cones. Cone cells can be divided as follows:

Since we have three distinct photoreceptors, we are trichromats. Our trichromacy dictates which part of spectrum of the electromagnetic field we will be able to see. Most of the animals, though, are dichromats (they have only two photoreceptors) but some animal’s vision is more complex as they are tetrachromats and their receptors are able to “receive” vaster part of electromagnetic light spectrum. Great example of tetrachromacy in animal world is goldfish and zebra finch.

Now, while the anatomical reasons can be explained quite easily, the evolutionary case of WHY we have developed to see the particular colors is much trickier and cannot provide one solid, universal answer. The opinions are various.

One theory claims that our eyes supposedly evolved in water and that’s the main reason why we see the comparatively narrow portion of ~400nm – ~750nm. Another one suggests that humans have evolved as diurnal animals that lived under bright light conditions and hence their eye adapted only those colors which are necessary for our survival. For example, nocturnal animals that tend to hunt during the night-time have evolved other adaptations; their vision is slightly different to ours, their eyes are much more sensitive and some have even evolved to see in the UV spectrum. It is likely that our brain simply would be overwhelmed if we could see ALL the colors of electromagnetic spectrum. It would be unnecessary input to our brain and simply because we can survive by seeing just this particular part of the whole spectrum, our brains have not evolved to “reach out” for more. Birds and bees, for example, see other wavelengths that are not visible to our eyes because those other wavelengths have proved to be useful to them.