Solar panels vs solar shingles: which to chose?

We are all familiar with solar rooftop panels as an option for powering your home using the forces of nature alone. No longer can it be said, however, that solar panels have a monopoly over the solar industry. Solar shingles are a relatively new face on the solar market but are rapidly making a name for themselves. In this article we compare the two – solar panels and solar shingles – against various criteria, to determine which is a better choice for YOU. Read on.

Many of us don’t want the appearance of our homes blighted by unsightly add-ons. This fact alone could be enough for many of us to choose solar shingles over panels. Solar shingles basically just replace some of the tiles on your roof; with the tiles that remain, they fit in seamlessly, both in terms of appearance and size/shape. Rooftop mounted solar panels, however, must first be installed atop a metal rack raised above the roof tiles: many people don’t like this appearance and feel it detracts from the overall attractiveness of their property. If you have solar panels, you can be sure everyone will know about it just by looking! So far as sheer looks and aesthetics go, solar shingles trump panels – they integrate themselves into your property far better than conventional solar panels.

This largely depends on whether you are doing a new roof installation, or whether you are simply installing panels or shingles on top of an existing roof. In the former case – ie. where there is a new building, or an existing building is being completely re-roofed – shingles are probably the cheaper option. This is because shingles, as we have seen, basically just replace roof tiles, so if you buy shingles the other side of the coin is that you won’t have to buy and install as many roof tiles. If you purchased solar panels, on the other hand, this would be in addition to a fully tiled roof.

For existing roofs, however, solar panels are probably cheaper, because in this case you simply mount the panels on top of the existing roof. If you purchased solar shingles for an existing roof, though, you would first have to pay to remove some (perfectly functional) roof tiles to make room for the shingles. This adds an extra level of cost to your installation.

Solar shingles are still a relatively new technology, however, they have already made leaps and bounds in terms of their efficiency (ie how well they convert energy into light). Thin-film solar shingle technology can now reach almost 20% conversion efficiency, due to newly minted ‘copper indium gallium diselenide’ technology (CIGS) – almost the same as traditional silicon-based solar cells.

However, when we look at efficiency, we also need to factor in how well (‘efficiently’) your shingles/panels gather sunlight. With solar shingles, you are pretty much limited by the position of your roof – you can’t alter your shingles’ angle and tilt to improve their access to solar rays as the sun changes position in the sky during the day. On the other hand, the position of solar panels isn’t confined by the angle of your home’s roof. The tracking your panels sit on can be adjusted to maximize the amount of sun exposure. Many solar panels can now be equipped with automated tracking technology so that they automatically follow the sun across the sky throughout the day. Solar panels can also be GROUND-mounted where rooftop space is not available, or wherever your roof doesn’t face in the right direction. This gives them another boost over shingles when it comes to sheer versatility. 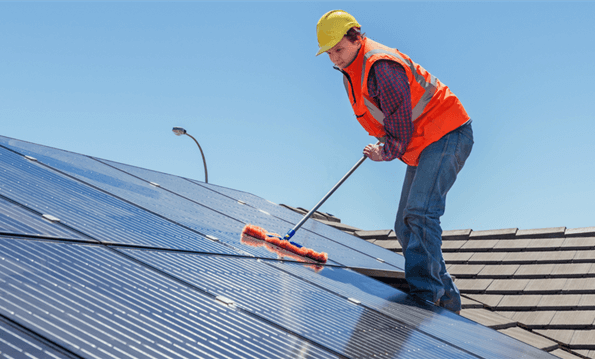 Solar panels and shingles are both fairly low maintenance, however, when it comes to repairs there may still be some differences between them. For example, in the event that a solar shingle required replacing, the shingle – as well as perhaps others surrounding it – would have to be removed, which will temporarily expose your home’s interior. On the other hand, replacing a conventional solar panel would be a lot easier, as you can simply lift the panel off the tracking – you don’t need to interfere at all with the structure of your roof.

Solar shingles and solar panels both have upsides and downsides. Which one is better for you? That will likely come down to your priorities: are you overly concerned about appearances and aesthetics, or do you just not care? If it’s the former, and if you will be installing on an existing roof, then solar panels are probably a better option. Otherwise, it’s probably neck and neck. Our verdict: we would probably lean towards solar panels, as they are a more established, tried and trusted technology. However, there are plenty of good solar shingles out there as well.