The science behind wake-up lights

Light is related to life. When the light appears, life often naturally follows and the human body system tends to work according to that pattern. That’s why there’s a relationship between day and wakefulness, and night and sleep, hence the level of activity of a person and their ebb and flow during the day is strongly influenced by daylight. Sunlight, after all, means energy and it is a known fact that people are more active, happier, and fitter in summer.

When it comes to sleep, the way the human body works is such that it requires sleep to maintain proper physical and mental health. Ergo, sleep serves as a restorative and therapeutic process. However, when people sleep, the brain does not sleep, rather it goes through different levels of activities during the sleep periods.

The principle of wake-up lights 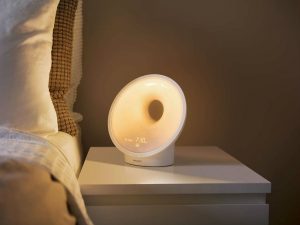 Wake-up lights work on the principle that exposure to light of the right kind and in the appropriate amount helps a person wake up and make a comfortable switch to their daily routine. The principle is based on the concept of dawn stimulation or mechanical sunrise. It involves timing lights in a room to come on in a gradual manner over a period of time (from thirty minutes to as long as two hours) before the person wakes up.

Dawn stimulation works on the basis that light signals in the early morning have a much greater effect on the biological clock of the body than the light signal at other times of the day. The wake-up lights simulate sunrise conditions, essentially working as a sunrise alarm clock of lights instead of sound, by gradually increasing the brightness and the intensity of the light it emits.

Wake-up lights wake people up as naturally as possible, reducing morning sluggishness and making a huge impact on the way they go about their day’s activities. When a person sleeps, they go through different phases or stages of sleep (stage 1, stage 2, stage 3, stage 4 and rapid eye movement). Some of the sleep stages are light while others are deep. The deep stages of sleep are stages 3 and 4. When a person is in a light stage of sleep, it’s easier for them to wake up and they feel energetic, bright and more rested. The stimulation of an artificial dawn does not reduce the secretion of the hormone that causes sleep in the body but rather brings the body from a deep phase of sleep to a lighter phase of sleep. That’s the purpose of the increasing light intensity. Besides, the fact that the body is sensitive to low-intensity light in the early morning enhances the effectiveness of wake-up lights. The body naturally responds to the wake up light alarm clock.

Research into the impact of wake-up lights reveals the following:

Wake-up lights take into consideration three factors that affect humans; the circadian rhythm of sleep and wakefulness, body hormones, and the concept of sleep inertia.

The circadian rhythm of sleep and wake

At night, the eyes feel heavy. During the day, they stay open. That’s because of the sleep/wake cycle or circadian rhythm of humans. The sleep/wake pattern determines when the body wants to be asleep and when it wants to be awake. Typically, the average person has a 16-hour wake and 8-hour sleep cycle in 24 hours. The cycle is affected by the level of secretion of hormones and chemicals over the course of the day. When the chemicals and hormones are not secreted in the normal way they should be, a person may begin to feel tired and sleepy during the day or awake at night. That’s where wake-up lights are beneficial because they can help the body wake up from sleep naturally or restore the balance in the body’s sleep/wake cycle. 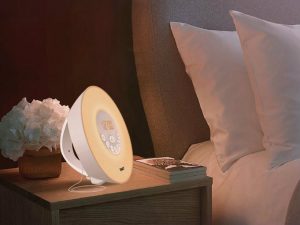 Under normal circumstances, when it’s getting dark in the evening, the body begins to secrete melatonin, a hormone that makes people feel sleepy. The body begins to secrete the hormone about two hours before bedtime although the exact time varies from person to person depending on their circadian rhythm. In the morning when the sun rises, the body produces serotonin (often referred to as happiness hormone). The hormone regulates the level of activity and well-being of people and keeps them awake.

The concept of sleep inertia

Sleep inertia is the sleepy feeling that a person has after waking up from a deep sleep. It is a temporary period of reduced arousal after awakening. The period of sleep inertia is usually characterized by confusion, lack of energy, sleepiness, and impaired physical strength and cognitive performance. It usually lasts for a short period, from a few minutes to less than an hour. On unusual occasions, it could last longer and may extend to a day in extreme situations. The absence of morning light has been shown by various studies to aggravate sleep inertia, a condition which artificial dawn simulation resolves. In addition, when people wake up abruptly, they suffer from sleep inertia.

Wake up lights are useful for: