What types of solar energy are out there?

With fossil fuels becoming ever scarcer, and the prospect of human-induced climate change looming ever larger on the horizon, more and more people are taking an interest in alternative energy sources like solar power. We’re here to give you a rundown on SOLAR ENERGY and the different types of solar energy sources that are available. Read on to find out more.

Firstly though, all forms of solar energy, rely on capturing some of the free energy emitted by the sun at every instant and converting this into forms that can be utilized by us humans to power our homes. Solar energy is a completely clean and renewable energy source with the potential possibly to meet the entire world’s energy needs. That is why there is so much interest in it at the moment. Here are the main forms of solar energy out there at the moment … 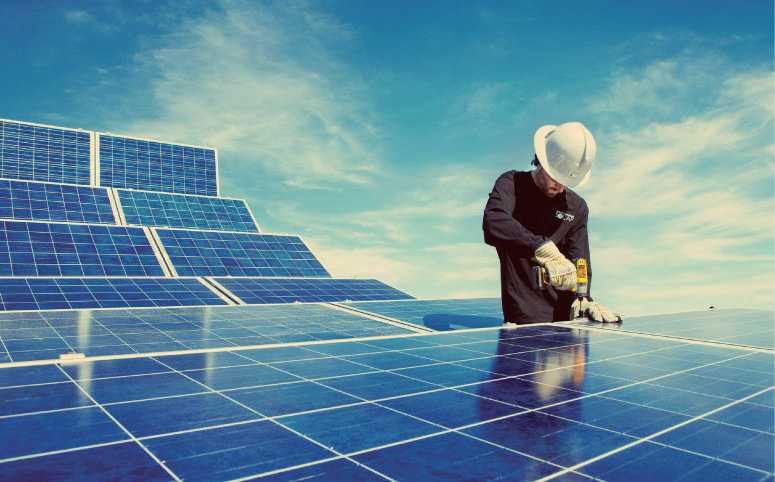 Photovoltaic solar technology: PV panels are placed on the roofs of homes and businesses where they harness sunlight during the day and convert it into electricity that can be utilized by households. How do they work? via the photovoltaic effect (from which they derive their name) – when sun hits the semiconductor elements (usually silicon) that make up the PVC panel, electrons are knocked loose, and because the “solar cells” are arranged so that one end is positively charged and the other negatively charged, an electric current is generated – direct current, to be precise, which an attached inverter then converts into alternating current that can be utilized by household appliances etc.

Solar thermal technology: by contrast with PV solar technology, solar thermal technology harnesses the sun’s HEAT, transforming it into mechanical energy and from there, into electricity – which is called concentrated solar power. It is most often used to provide home heating and hot water needs. How does it work? The solar thermal collector absorbs the sun’s rays via flat-plate collectors (usually dark colored), which are topped with thermal insulation including glass sheets that generate a type of mini greenhouse effect – and then transfers this to a heat transfer fluid, like water, air, molten salt, or even antifreeze, which in turn heats a water network, producing steam and driving a turbine that generates electricity. There are also technologies called solar-thermal air collectors – most often used in agriculture to dry crops – and systems that utilize plastic/rubber rather than glass and insulation glazing (see home swimming pool heating systems).

Passive solar heating: this one is easily overlooked, but did you know you can ALSO harness the sun’s energy in order to heat and light up your home WITHOUT using any additional mechanical devices? Simply design your house so that it has south-facing windows that receive plenty of sun exposure, and lots of good insulation so that the solar energy that gets INTO your house can’t get back OUT, and you can heat your home for free.

Large or small scale installations: quite apart from the different solar technologies out there, we also need to distinguish between individual/home solar systems, that supply the power needs of the individual household (eg the PV solar panels you place on your home’s rooftop, or the solar thermal collectors that power your home hot water system), and large-scale solar power plants that cover acres upon acre and generate electricity on a grand scale, which they then feed into the mainstream power grid. Large-scale solar thermal plants make use of vast arrays of mirrors installed over a large area, that capture and absorb the sun’s rays. They work best in locations with intense sunlight that are also free of surrounding landmarks that might absorb the sun’s rays at the expense of the, such as the desert.

There you have it then. Solar power is the wave of the future, and you are probably as keen as anyone to jump aboard the solar bandwagon, however, before doing so you need a roadmap to the solar territory. By outlining the different types of solar energy that are out there, this article does just that.