What is LED Art?

No doubt most of you are already familiar with the existence of LED lighting – these super bright, energy efficient and long-lasting lights are rapidly phasing out older lighting technologies in domestic and commercial settings alike. However, one LED-related concept you may not have heard of is LED Art. LED lighting is widespread, nowadays, in fields as diverse as advertising lighting, street lighting, cinematic and photography lighting, the lighting used for theatrical stage productions – it is even used in some art galleries to illuminate and enhance the artwork contained there – and many new artworks are beginning to incorporate LED lighting into the compositions themselves. It makes a lot of sense, therefore, to talk of an ‘LED Art’ movement, and indeed it could be argued that this is one of the major art movements of the 21st century so far. Read on to find out more 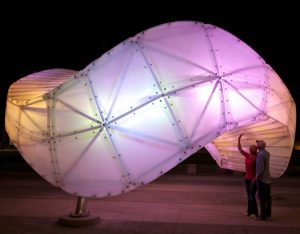 LEDs have numerous advantages over conventional light sources such as incandescent and fluorescent lights. These include energy efficiency and low power consumption; longevity; compactness; brightness; lack of heat output, flickering or noise; turning off and on more quickly. Because of these benefits, LEDs are rapidly phasing out these older lighting technologies in many settings, domestic and commercial alike. And due to their low power requirements, versatility, and the availability of many different size and color options, a lot of artists are starting to see the potential in them as well.

‘LED Art’ did not start to appear until very late in the 20th century. This is because LEDs did not appear in any electrical lighting application at all until 1962. And these original LEDs were certainly of no interest to artists; scientists had not yet worked out how to use semiconductor diodes across the entire light energy and color spectrums. In fact, those early LEDs were almost exclusively red in color. The earliest LED lights were very weak as well.

Gradually, LED technology began to improve, and LED lighting started to find more uses. In fact, one of the earliest applications of LED lights was in advertising lighting and electrical signage of the sort used outside some shops. As the 20th century drew to a close and we entered the 21st, LED lights became commonplace in many settings, including film, theatre, professional photography – it also found widespread application in art galleries, where it was used to illuminate and enhance the artworks contained therein. And the LED lights began to be used as a major component of artworks themselves. Let’s take a look at what can be considered the four major categories of contemporary ‘LED art’: advertising art, street art, entertainment art, and aesthetic art. 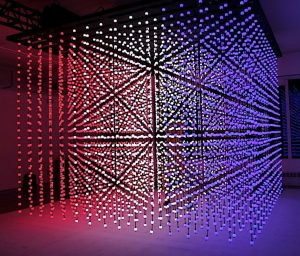 As we have seen, LEDs have long been used in advertising and shop signage. Today, LED screens have become for many businesses the preferred form of signage to communicate with their customers, as well as to create an appropriate atmosphere and vibe for their store. Because of their low power requirements, ability to be changed at a moment’s notice, and vivid, colorful visuals that are impossible to ignore, LED screens can now be found in shopping centers, sports stadiums, and other public spaces. They support multiple media, including text, graphics, animation, picture, and video – including combinations of all these. Indeed, some of the advertising signs you will see about town are works of art themselves – hence the inclusion of advertising signage under the category of ‘LED Art’. To display the relevant images, graphics, text etc on these signs, simply connect a computer or plug in a USB and upload the relevant files, and the screen will play the files in a continuous loop for as long as it is turned on.

Similar to advertising art, LED entertainment art is used for fun and to supply visual effects at concerts, parties, and other public events. It is usually removed once the event is over. For example, at many night-time events now, you will find vendors selling LED flashing T-shirts and jewelry, body lights and ‘blinkies’ – tiny electronic devices containing a battery-powered LED lights and which emit very bright, multicolored flashing light.

A lot of what we call ‘LED Art’ is actually street art created by guerrilla artists, temporary art pieces that are placed in public places and are designed to draw attention to political and social issues. Due to its affordability, compactness, and brightness, LED lighting is a great means of adding dramatic effect and increasing the visibility of the message the artist is trying to convey – whether through painting, sculpture etc.

Most of the LED ‘art’ we have look at so far is not what you would call conventional aesthetic art, ie compositions that, like conventional painting, drawing, corporate art, and sculpture, are designed to last and be appreciated down the generations due to their enduring beauty and other aesthetic qualities. And, yet, such pieces that incorporate LED technology are beginning to appear at shows and in galleries as well. One well-known artist who uses LED in her work is Jenny Holzer. Another is Meeli Koiva (or Mery Crystal Ra), most famous for her art installation called ‘Reactive River’.

There you have it, then! LED Art is very real, though still, in reality, one of the budding art movements of the 21st century. As LED technology continues to progress, and artists become more and more aware of it’s potential, who knows what artistic possibilities lie in store. The future looks bright, and in more ways than one.