When is the best time to buy LED light bulbs

Light-emitting diodes, or LEDs, are rapidly phasing out older forms of lighting technology like incandescent and halogen light bulbs. Due to their superior energy efficiency, longevity, compactness, versatility, light quality, and environmental friendliness – going out right now and replacing all your home’s lighting with LEDs may seem the obvious thing to do. But not so fast. Unless your sole aim is to reduce carbon dioxide emissions and save the environment, then a better strategy for lowering your household’s energy usage and saving money may be to hold on to your existing lights until LEDs become even more efficient and lower in cost, which they are sure to do in the years ahead. Read on to find out more. 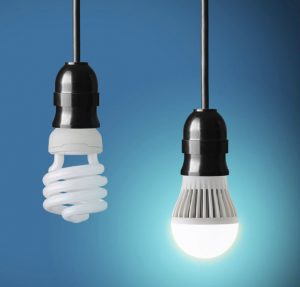 First, though, a word about LED technology. A light emitting diode contains as its primary component a semiconductor material (or ‘diode’) that generates light via the electroluminescence effect. That is, an electrical voltage is passed through the semiconductor material, liberating electrons from the surface of the diode so that in the process they emit energy that appears to us as visible light. Unlike light bulbs that produce light (heating a filament until it glows), LEDs are a means of transforming electricity into light.

And they do so very well. Compared to older forms of lighting technology, like incandescent, fluorescent and halogen lights, LEDs are considerably more energy efficient and long-lasting, having the potential to save you loads of money on your power bills and replacement bulbs – and save the environment, due to their lower greenhouse gas emissions and carbon footprint. Indeed, quite apart from being the sensible personal economy, LED lighting is also being touted as one of the major solutions to our current set of environmental and energy crises.

LEDs also possess numerous other advantages over conventional lights – namely, they are lightweight and compact, have lower heat output, no flickering or humming issues, and are also available in multiple colors.

Given the manifold advantages of LED lights compared to older forms of lighting technology, going out today and replacing all the incandescent and halogen bulbs in your home with LEDs may seem like the obvious choice. But actually, the situation is not as straightforward as it seems.

LED technology has come a long way over the past couple of decades. Due to gains in efficiency and affordability, there are now LEDs lights to be found in all manner of applications, domestic, commercial and industrial alike. You can now find LED lights on your smartphone and mobile phone screen, your car, and in outdoor decorative and novelty lighting. LED lighting technology is expected to improve even more in the years ahead, becoming ever more efficient and affordable as technology improves and production expands, driving the cost down further.

That is why it makes sense to wait a while before replacing your home’s lights with LED light bulbs. For example, if you buy LED two years from now, by which point the technology has improved to the point where they are one third more efficient than they are presently, then the energy savings you make over the course of the light’s lifetime will be a lot greater than those that can be achieved using LED lights in their current, less efficient and more expensive, carnation. In fact, one of the major reasons cited by householders for passing up on the opportunity to purchase LED lights is that the upfront cost is still pretty steep – even if there are huge energy savings to be made down the line, not everyone has that money lying around to pay the market cost of the lights right now. But if you wait a few years, this problem will have largely been overcome. 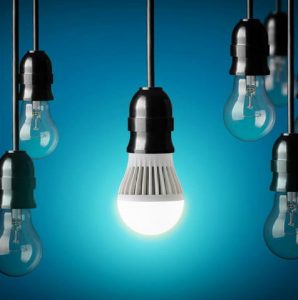 You may actually be better off replacing your existing lights with compact fluorescent lamps – a lighting technology that is more efficient than incandescent bulbs, though less efficient than LEDs – then switch over again to LEDs several years from now. That way, you can enjoy energy savings right now, but not lose out on future gains due to purchasing your lights while the technology is still in it’s (relative) infancy. After all, CFLs are now a mature technology and are not expected to become much more efficient in the years ahead. Moreover, home lighting accounts for about 10 percent of energy use in the average household; for many people reducing their energy usage and lowering power, bills is an urgent imperative, and not something that can be put off indefinitely. Upgrading your home lighting to CFLs today is an easy way to lower energy usage and reduce your power bills today without waiting till the technology becomes even cheaper.

And what about your next home lighting upgrade, this time to LEDs? According to Lixi Liu, author of a recent study published in Environmental Research Letters, if you use your home lights for an average of about three or four hours per day, it may be best to delay your purchase of LED lights until 2020. The exception is if you live in an area where electricity costs are especially high – in that case, you will save more money by converting to LED lighting sooner. Using a method known as life cycle optimization, which takes into account factors like how often different forms of lighting are used, their lifespans, as well as the future trajectories anticipated for different lighting technologies and power generation sources, she and other authors of the study generated a computer model which arrived at these and other conclusions about the best lighting replacement strategies for different households.

So in conclusion, and rather counter-intuitively, now may not, in fact, be the best time to replace your incandescent, fluorescent and halogen lights with LEDs. By putting it off for a few years, you will enjoy even greater energy savings later on down the line. Though of course, if you want to reduce your carbon emissions as much as possible, as soon as possible, then it may make more sense to upgrade to LEDs today.