There are two main types of solar panels – Solar Photovoltaic (PV) panels and solar thermal energy panels. First generates electrical power by converting sun energy into electricity. Second uses sun energy to heat up water tank and produce hot water in a building. In this article I will be talking about the first – Solar Photovoltaic (PV) panels as they are closely related to solar flood lighting. So further in article the term „solar panel” is going to be used to describe a solar photovoltaic panel.

First of all, the sun is tremendous energy source. The amount of energy that the sun transmits to the earth in an hour is enough to provide energy to whole world for one year. Sure, it is not possible to collect all this energy and convert it into power we need, but people are getting closer to using solar energy as our primary energy source. Solar energy has noticeable benefits over other energy sources. First of all, it is free for everyone. Of course free is probably not the correct word when describing solar energy, although we can get sun energy for free, we still need special tools to convert this energy to electricity or other useful type of energy, and these tools are definitely not free. Second, sun energy is independent and people do not need to depend on electricity prices dictated by government or private companies. Third, usage of the sun energy do not harm earth almost in any way, we reduce carbon emissions, pollution, and do not consume the Earths valuable resources. 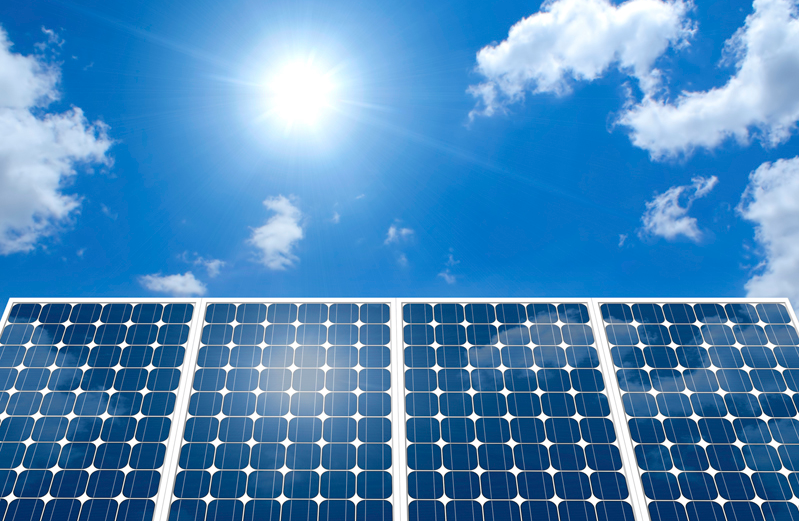 Solar panels are still in a continuous development process and scientists are looking for ways to improve their efficiency and lower manufacturing costs, and they are also searching for new materials that can improve efficiency of a solar cell. The current technology mostly involves using crystalline silicon forms and silicon is used in 90% of solar panels produced. Also, latest technology thin-film modules are becoming more popular as they cost cheaper to make and can also be made flexible, which allows to use them in portable applications.

Most solar panel cells are made from crystalline silicon. Silicon is actually the second most abundant element in the Earth’s crust and can be found in dusts and sands. Solar panels uses photovoltaic effect to generate electricity from the sun light. Here are the basics of how solar cells and solar panels work. 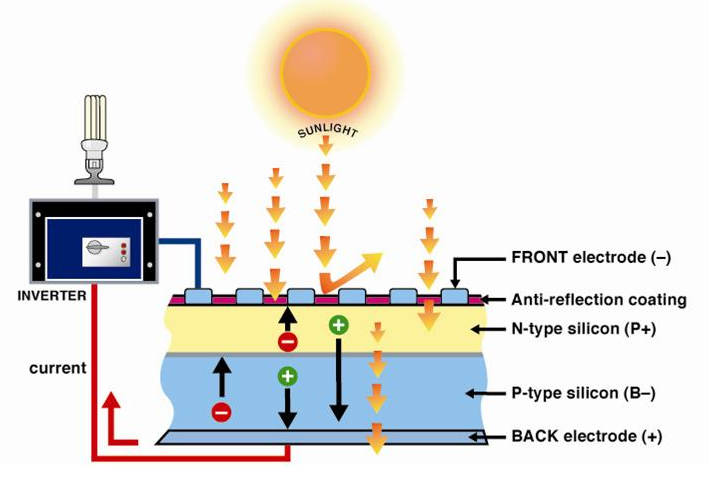 What materials are used?

Solar cells are made from layers of semiconductor material, which usually is silicon. Silicon is one of the most common elements on the earth and is used in most PV cells. Crystalline silicon is used in monocrystalline and polycrystalline solar cells, which are the most commonly used across different application. In thin-film solar cells different materials than silicon are used. Most solar cells have protective glass layer on the front that protects them from outer elements and insulating layer with a back sheet on the back of the cell. Because silicon is shiny material, a special antireflective coating is applied to the surface of the cell to improve efficiency of the cell. Conducting wires can be made from different transition metals like silver or copper. Multiple individual PV cells are connected together in a grid to get appropriate voltage and current. These cells are put into a hard frame, usually made from aluminum that strengthens the panel and protects it from different impacts and allows mounting the solar panel in different ways, for example, on a roof of a house.

Solar system used in a house requires a special inverter that inverts DC current to AC that can be used to power different electric appliances in a house.

Thin-film solar panels can use other materials besides silicon, or combinations of silicon and different materials. Thin-film cells are created on a glass substrate. The most common types of thin-film solar cells are:

As stated in the beginning of this article, active solar panels can be divided into two categories – solar photovoltaic and solar thermal panels. Solar photovoltaic (PV) panels are used to generate electricity from the sun light and solar thermal panels are using solar energy for heating water tanks to produce hot water. We are going to look at solar PV panel types in more details as they are used to generate electricity and are closer related to solar lighting.

Currently, there are four different solar PV panel types used to produce electricity from the sun energy. These types are: 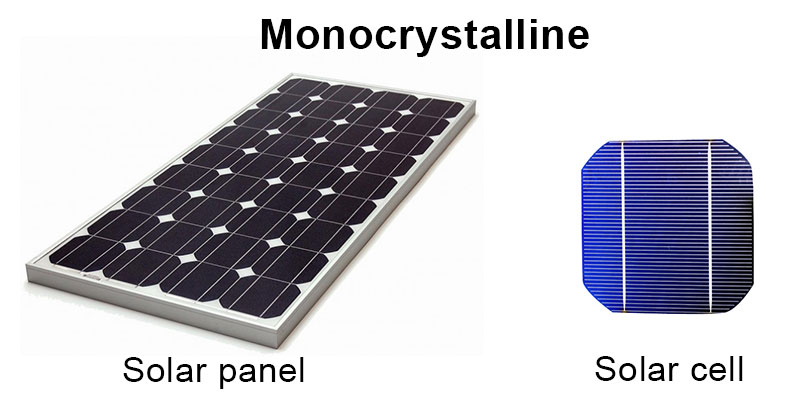 Monocrystalline silicon is a semiconductor. It is made from pure silicon and contains extremely small amounts of other elements. Silicon monocrystals are grown in a process called Czochralski process. In result of this process, large, cylindrical shaped ingot is formed. This ingot is then sliced into thin, round wafers and trimmed into a square shape, so they can be easily arranged into solar panel. 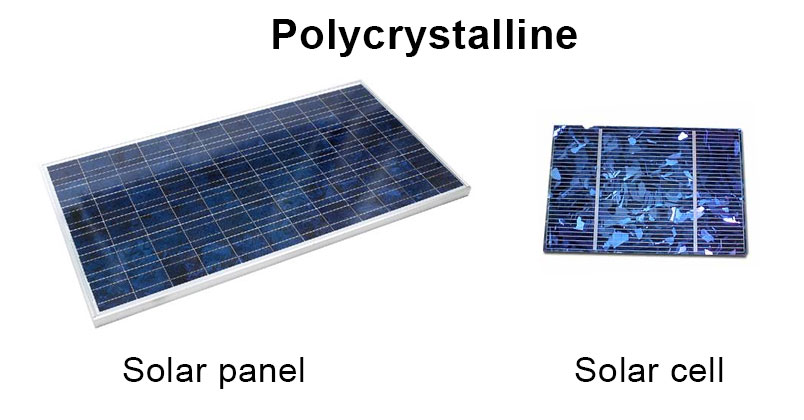 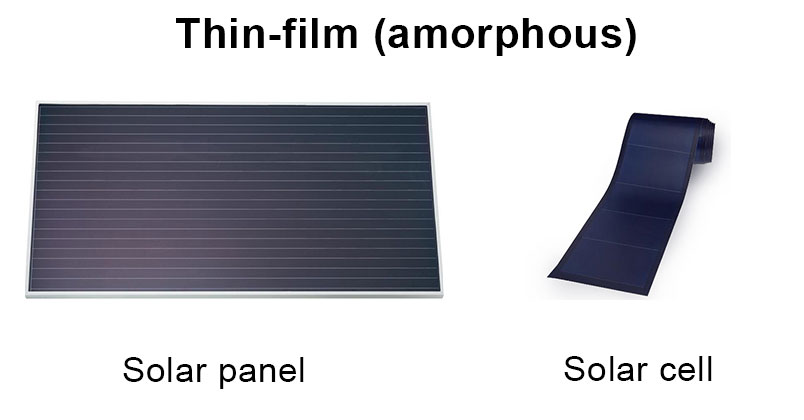 Thin-Film solar cells are made by depositing thin layers of photovoltaic material on a substrate. Thin-Film solar cells may use silicon or other substances as active material. Thin-Film cells are currently less efficient than monocrystalline or polycrystalline cells with efficiency of approx. 10% depending of the technology and material used in a thin-film cell. However, thin-film solar technologies are still in a development process, and we are probably going to see huge improvements of this solar technology in the near future. 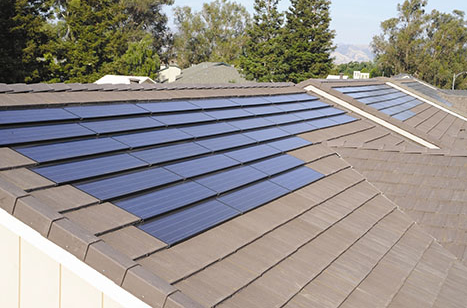 BIPV or building integrated photovoltaics are solar photovoltaics that are integrated into the building in form of solar shingles, solar tiles, slates and others. This type of PV can be integrated into roofs, facades and even windows. BIPV are becoming more and more popular and are being used in many newly built buildings like large office centers to help save more energy and generate some volume of electricity needed for the building. However, BIPV have some visible disadvantages compared to building-applied photovoltaics. BIPV can cost a lot more than regular photovoltaics. However, they can cut down on expenses of other materials that might be needed for a new building in places, where BIPV are going to be used instead. BIPV are also less efficient and will usually have shorter lifetime.

Solar flood lights use the same solar cells that are used in large photovoltaic systems. Three most popular types of solar panels used to power flood lights are: 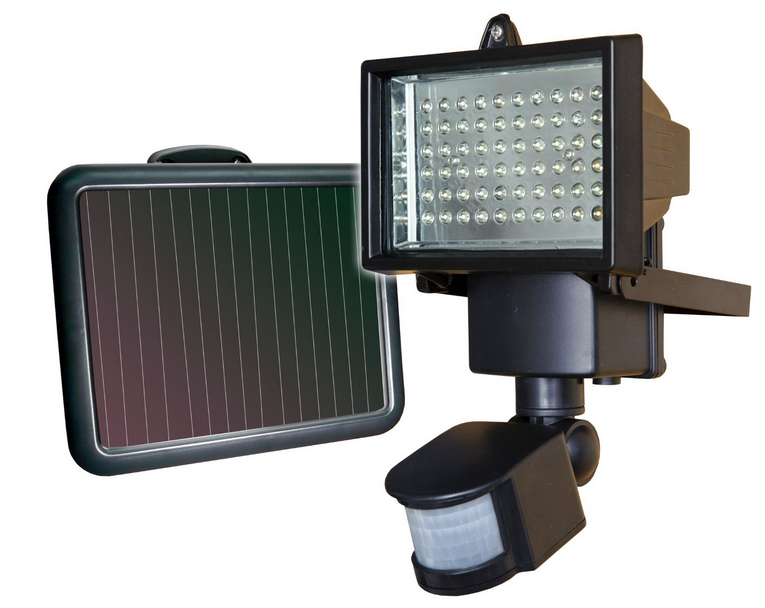 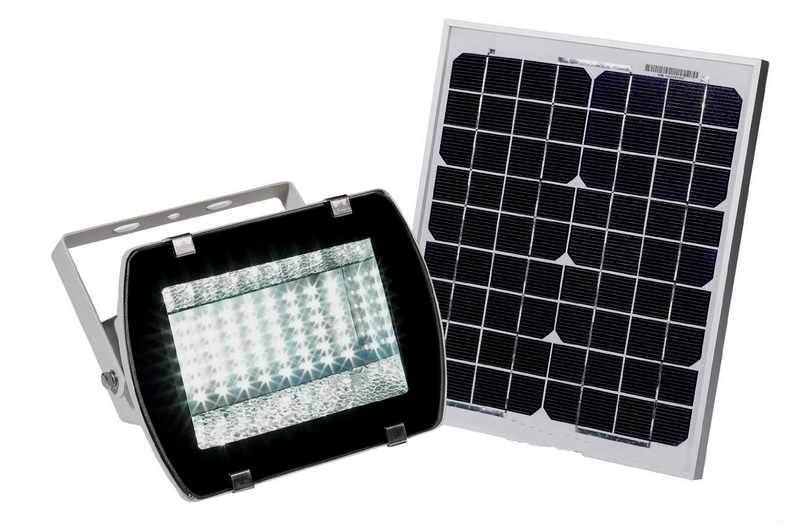