The Potential of Solar Windows

Switching to a solar-powered lifestyle has been gaining momentum for quite some time now. With the development of new technologies that help us turn the Sun’s energy into heat or electricity, it was a matter of time before someone thought of solar windows. It seems like a fairly intuitive idea, but unlike solar panels on the roof of your house or your RV, the ones on your windows need to be a little more sophisticated.

As you already know, solar panels are either black or dark blue, in order to attract the most sunlight. However, you can’t put those panels on your windows, because that would rid them of their basic function – letting the light inside. As Lance Wheeler, a scientist at National Renewable Energy Laboratory (NREL) in Colorado, put it in a recent press statement: “There is a fundamental tradeoff between a good window and a good solar cell”. 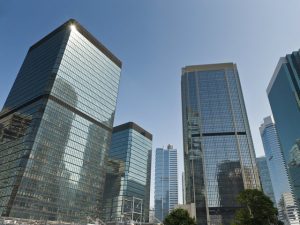 Although scientists haven’t yet figured out exactly how to create a perfect balance between the sunlight going through the windows while still collecting a good amount in order to turn it into AC power, there has been a breakthrough in technology that could allow for solar panel windows to be installed nation-wide: perovskites. Perovskites are materials with a crystal-like structure that are made of a mix of different elements. Their structure is a result of a complex they form with a chemical known as methylamine. When the window temperature hits 60 degrees Celsius, the methylamine breaks from the perovskite because it vaporizes – causing the window to switch from almost-transparent to opaque. Then, the perovskites transform up to 11.3% of heat into electricity. Think of it this way: we’ve all seen people that have a glasses-sunglasses hybrid, whose lenses are transparent while in the shade, but quickly become tinted in direct sunlight. Perovskite solar panels work in a similar fashion, only they produce electricity as well.

The Good News and the Bad News

The bad news is, that research has found the perovskite efficiency to drop after around 20 cycles. It is assumed that this happens due to the fact that they never get the time to cool down enough to go back to the initial crystal structure they form with methylamine molecules. In order to fix this, Peidong Yang, a chemist at the University of California, Berkeley, had published a study in which he tested the efficiency of a perovskite solar power windows, but this time without the methylamine. These “solar cells undergo thermally-driven, moisture-mediated reversible transitions between a transparent non-perovskite phase (81.7% visible transparency) with low power output and a deeply colored perovskite phase (35.4% visible transparency) with high power output”. However, the problem is that at their maximum, these window solar cells only have an above 7% efficiency and switch to opaque only when a window gets heated to 105°C. Additionally, the perovskites have an orange-red tint to them when they turn opaque, which could be a deal-breaker for a builder to implement in a new building because buyers might easily be put off by those hues. 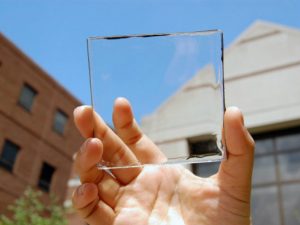 So, why is this low efficiency a problem, you ask? Isn’t 7% better than none? Well, yes and no. Sarah Kurtz, a scientist at the NREL, explains the problem this way: “Look at it from a physicist’s point of view. A solar panel that’s put out in the desert in a nice location with lots of sunshine may have something on the order of a one-year payback. If that [panel] sits out there for another 20 years, you get that much return on your investment for society.” However, if a solar window is only one-third as efficient as a regular solar panel, it will take three times as long to pay back the investment. Keep in mind that time would really be much longer than in the example mentioned above, simply because most buildings are not, in fact, build in the middle of a desert, where it’s practically always sunny.

From the investor’s perspective, their interest in financing the construction of a new building lays in the fact that investment will pay off and make a twofold or even threefold profit in a short amount of time. You should also take into account that an average lifespan of a solar window would be about 7-8 years, which begs the question whether installing them into existing buildings in order to make them greener would be a reasonable move to make. For now, it seems that as new technology develops, solar windows will be implemented in newly constructed buildings.

A Look into a Brighter Future

Even if it’s not quite there yet in terms of profitability, science development is fast-paced and we could reasonably expect solar windows to be the norm in the decades to come.

Jacek Jasieniak, an Associate Professor of Materials Science and Engineering at Monash University and the Director of the Monash Energy Materials and Systems Institute (MEMSI) is quite optimistic: “Studies in other countries have shown that you can save more than 30 per cent of a building’s energy use if you couple these types of technologies with appropriate light management systems,” he says. “If you combine building integrated PV windows with LED systems that assess actual lighting conditions I think we will be one step closer towards the net–zero emission buildings.”

In favor of Jasieniak’s optimism, Yang stated that he and his colleagues have already come up with a perovskite variation that becomes opaque in temperatures as low as 50-60°C, but additional studies on conversion efficiency are underway at the moment.

While there are companies that are already selling and producing the existing technologies to be implemented in existing buildings and houses, it might take a few more years for solar windows to really become commonplace. With perovskite progressing so well, we think it’s only a matter a time before a green building would just be considered a regular building.