If you want some fantastic outdoor lighting that can be used to beef up the security around your property; illuminate your front porch, steps and pathways of a night-time so you don’t break your neck stumbling home in the dark; OR decorate your landscaping and garden beds – then a set of LED solar flood lights may be the lighting option for you. Here are 13 reasons why you should opt for this type of outdoor lighting:

1. It’s better for the environment

It is slowly dawning on most of us that we have to take a lot better care of our planet if we wish to survive as a species; it falls on all of us individuals as well as a collective to take responsibility and buy only those products that are environmentally friendly. What makes solar power such a great option here is that it utilizes the FREE, clean energy supplied the sun to produce electricity, generating NO harmful carbon emissions. And LED lights are an eco-friendly lighting option in many ways also …

Unlike fluorescent light bulbs which contain a number of materials like mercury that are harmful to the natural environment as well as human health, LED lights are completely free of toxic materials and are fully recyclable as well, which will also help you lower your carbon footprint. When they reach the end of their lifespan, disposal of fluorescent lights has to occur through the proper channels. Selecting LEDs avoids the hassles involved in proper disposal, as well as protecting the natural environment from harmful toxic wastes.

LED lights have a much higher rate of conversion of energy into light then conventional incandescent or fluorescent bulbs, with dramatically reduced heat loss also. The best LEDs are up to 80% more efficient than traditional incandescent bulbs, and at least 5% brighter than CFLs. LED technology is constantly improving as well, so expect the efficiency of LED lights to improve even further over time. Because of their efficiency, LEDs go really well with solar power, because the nature of the latter entails that a steady supply of power cannot always be assured.

LEDs are renowned for having a more focused, precision beam than other light bulb options. As well as being more efficient at converting power into light, they also direct the light to where it is needed, rather than emitting light haphazardly in every direction and wasting it. Because of this, fewer LEDs are required to achieve the same lighting effect as incandescent and CFLs. This makes them the eco-friendly option as well, as fewer resources need to be consumed to achieve the same lighting results.

Your average solar panel is designed to last for 25 years and more. Meanwhile LED bulbs last up to six times longer than the other bulbs on the market, with some models having a lifespan of up to 100,000 hours’ translating into 20 years’ usage, thus saving you from having to frequently go out and buy replacements. Unlike standard incandescent lights, LEDs don’t burn out suddenly and cease working, they just gradually become dimmer over time. Again, this means fewer precious natural resources are used up in the process of lighting up your household. 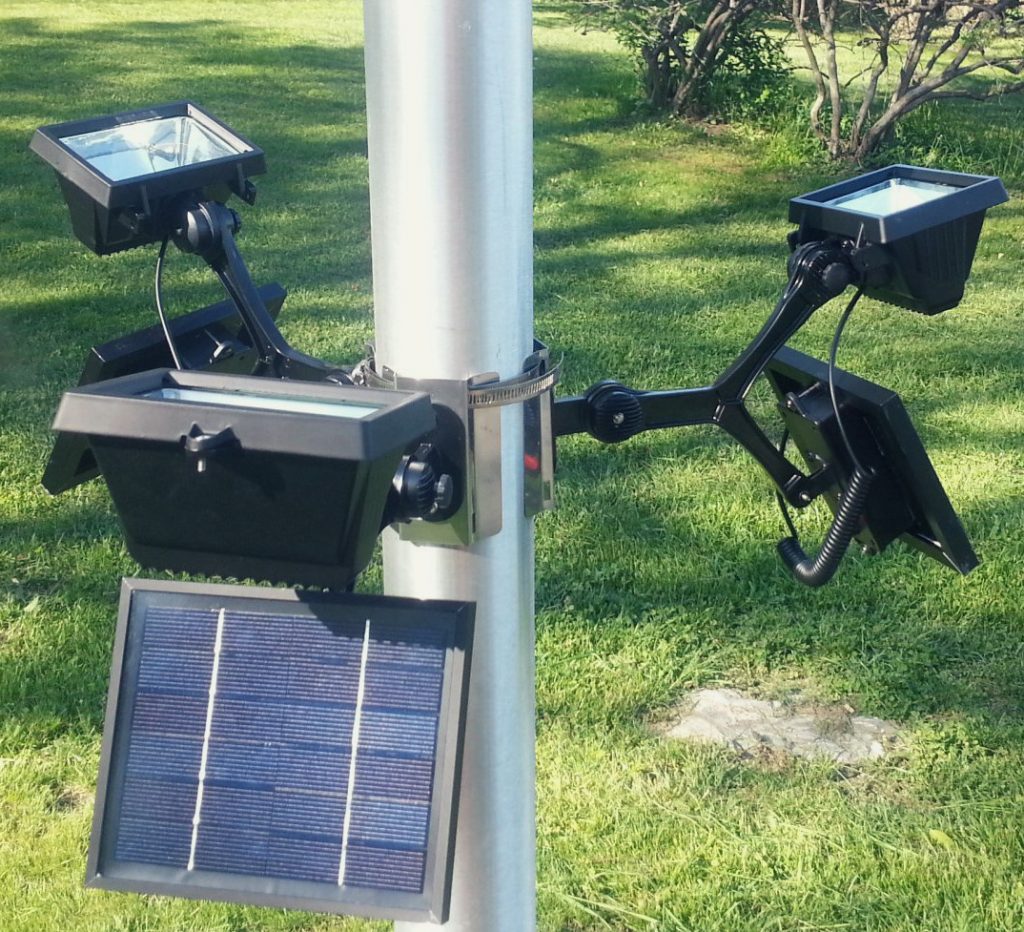 6. Solar LED lights can be used in short increments

Unlike CFLs whose lifespan is drastically reduced when you turn them on and off a lot at short intervals, LEDs can be used for short periods of time or long ones, with no effect on their performance or lifespan. This makes them an ideal option if you want some motion sensor lights for your property that only turn on when someone is in the area, then turn off again after a short period of time.

7. Solar LED lights give you independence

Solar LED lighting is wireless and lights up your property by utilizing the power of the sun alone. It makes you independent of the vagaries of the electricity grid, including ever-increasing power costs and outages during periods of peak demand.

Solar LED lights are easy to install and low maintenance, as they are completely wireless and automatically convert solar rays into electricity. And because the LED bulbs have such a long lifespan, you don’t need to worry about replacing them at frequent intervals.

Solar LED lighting is wireless, thus there are fewer risks of overheating, and accidents such as electrocution and strangulation. LED lights are much cooler as well compared to incandescent lights, thus they have a much lesser risk of causing combustion or fires.

10. You can use Solar LED lights to illuminate remote areas

Because they are wireless, and rely on the power of the sun alone, solar LED lights can light up remote areas that the electricity grid has trouble accessing.

LED light bulbs are built from epoxy lenses instead of glass which is much tougher and more resistant to shock and weather damage. Because they can withstand all weather conditions, they are the ideal partner for solar PVC panels which must be placed outside in the elements to be effective. Unlike CFLs, which are not designed to be used in very cold weather, LEDs can withstand all temperatures hot or cold.

LED light bulbs can be combined in any shape, unlike some other lightbulbs they can also be dimed, allowing you to achieve whatever lighting effect you desire.

Last but certainly not least, solar LED is far, far cheaper than the alternatives. When you consider many of the characteristics of LED lighting we just outlined – efficiency, long life span, fewer lights required, durability, ease of installation and maintenance, can be used outdoors or in short increments, etc – all of this translates into cheaper, more cost-effective outdoor lighting.

There then are 13 reasons for choosing solar LED lighting over other forms of lighting. If all of that doesn’t convince you that Solar LED is the superior outdoor lighting option, then we don’t know what will! As always though, don’t take our word for it: the best advice is to go out and try them for yourself, and make up your own mind. Happy lighting!