Using flood lights is an ideal way to provide illumination for outdoor areas such as tennis courts, football stadiums, playgrounds, etc. For a long time, people have been mainly using HID (high-intensity discharge) lamps. Usually, it’s the MH (metal halide) sub-category solutions that have lit area for sporting events and other activities in need of a highly illuminated territory. But today, we see more people switching to LED technology because LED-powered flood lights have become much more powerful, enabling to blaze fields of even bigger sports arenas with light. In this blog post, we’ll do a quick, yet comprehensive comparison of LED and HID flood lights to see why people have made the switch, besides the reason that LEDs are an interesting novelty.

Save the energy, save the nature!

One of the main advantages of LED flood lights is their contribution to energy savings. Research has shown that you can save anywhere between 65-80 percent when opting for LED flood lights. And the energy-friendliness gets an additional ‘green boost’ from the fact that there’s less overall waste being produced when using the light-emitting diode technology.

Did you know that HID flood lights might deteriorate at least 65% after burning for more than 9,000 hours? If the lights are being used in the Northern hemisphere where the winters are long and dark, then this might turn out to be a major concern when picking between different options. 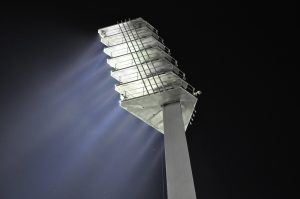 LED starts to slowly dim, but HID flood lights might lose their power and burn out abruptly. Many light system owners have noticed that they had to replace HID flood lights a few times during one season, but LED solutions lasted throughout the season, sometimes even extending into the next. Furthermore, LEDs have another perk in addition to the durability. Most HID flood lights have to warm up for 15-30 seconds after you turn them on. This might come as a significant delay when using these lights during performances and shows, where timing is crucial. Conversely, LED lights have an instantaneous turn-on technology, which won’t cause any problems even if time is of the essence.

Emissions are important too!

When we compare the emissions between LED and HID flood lights, we can quickly discover that LED lights are more efficient as they produce a relatively narrow spectrum of visible lights. In other words, LED bulbs don’t give out a lot of pointless radiation like UV (ultraviolet) or IR (infrared) rays. HID lights, on the other hand, produce a significant amount of both UV and IR radiation, which isn’t really useful to us. According to experts, some HID light emissions might be made up of about 30% of infrared radiation. And this makes these lamps utterly useless, since the goal of using them is to have efficient and bright outdoor lighting. 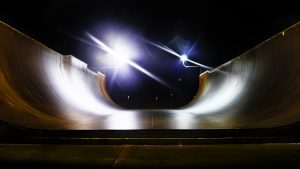 Clearly, LED lighting comes out as the winner in the match between LED and HID flood lights. The key findings are that LED lights are more environmentally friendly, last longer, and has a more efficient light output without emitting useless radiation. The only downside of LED flood lights might be that the nature of LEDs doesn’t allow for as tightly focused beam as it is for HID technologies. But even this might be countered with the constantly emerging of new and improved LED products being put on the market and available for us to buy.